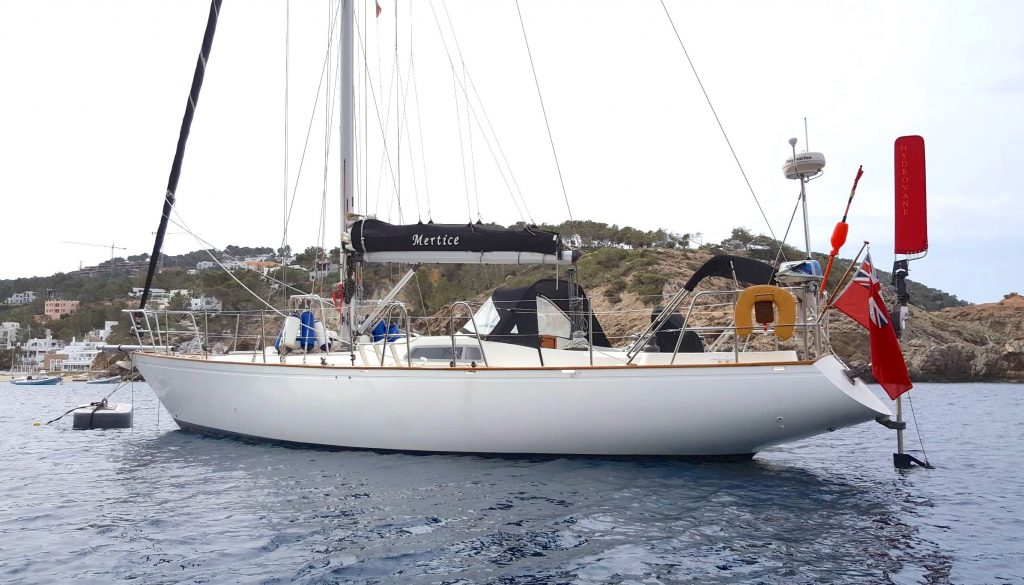 When first introduced the Nicholson 45 was highly regarded as the very latest in ocean racer design.

Her graceful lines were the epitome of her time with almost flush decks, a retrousse stern, balanced overhangs and attractive tumblehome.

“Mertice” is believed to be the last of this modern classic design and is an absolutely fascinating vessel.

Moulded in 1998, but not commissioned until 2004, her hull is fitted with a Volvo 40hp saildrive and consists of a long fin fully encapsulated lead keel and full skeg hung rudder. Her cockpit is deep and well protected and she is a comfortable and stable ocean passagemaker. Her interior fit out is a little basic, as she was built originally for a sail training trust, but her upholstery and range of recently fitted storage cupboards are of a high quality and she is extremely bright and spacious down below.

Topsides her lines are breathtaking.

In short, she is absolutely beautiful to look at.

Re-fitted twice in recent years by private owners, and being of comparably recent construction, she has the benefit of modern equipment as well as being blessed with gorgeous classic lines.

Due to an increase in family size, her current owner now wishes to buy a larger yacht, so much of her recent upgrades and preparations for blue water sailing have seen relatively light use.

Full details are in the main specification section here

but her highlights and upgrades include:

Available to view by appointment

ABYA yacht broker specialising in the sale of cruising and blue water yachts. Brokering yachts in locations throughout the Solent and the south coast including but not limited to: Southampton, Hamble, Hythe, Beaulieu, Lymington, Poole, Christchurch, Portsmouth, Fareham, Gosport, Port Solent and with additional partners for yachts located on the Isle of Wight and the wider UK. All yachts for sale subject to prior sale, price change, or withdrawal without notice. John Rodriguez Yachts is a trading name of John Rodriguez Yachts LLP Reg. No. OC416718 (England and Wales). Registered office C/O Connect Accounting, 15 Western Parade, Barnet, Herts, England, EN5 1AH. VAT No: 180730322. FCA FRN Number: 676493. Website content - All our intellectual property rights are reserved and any unauthorised use is prohibited, see terms and conditions.